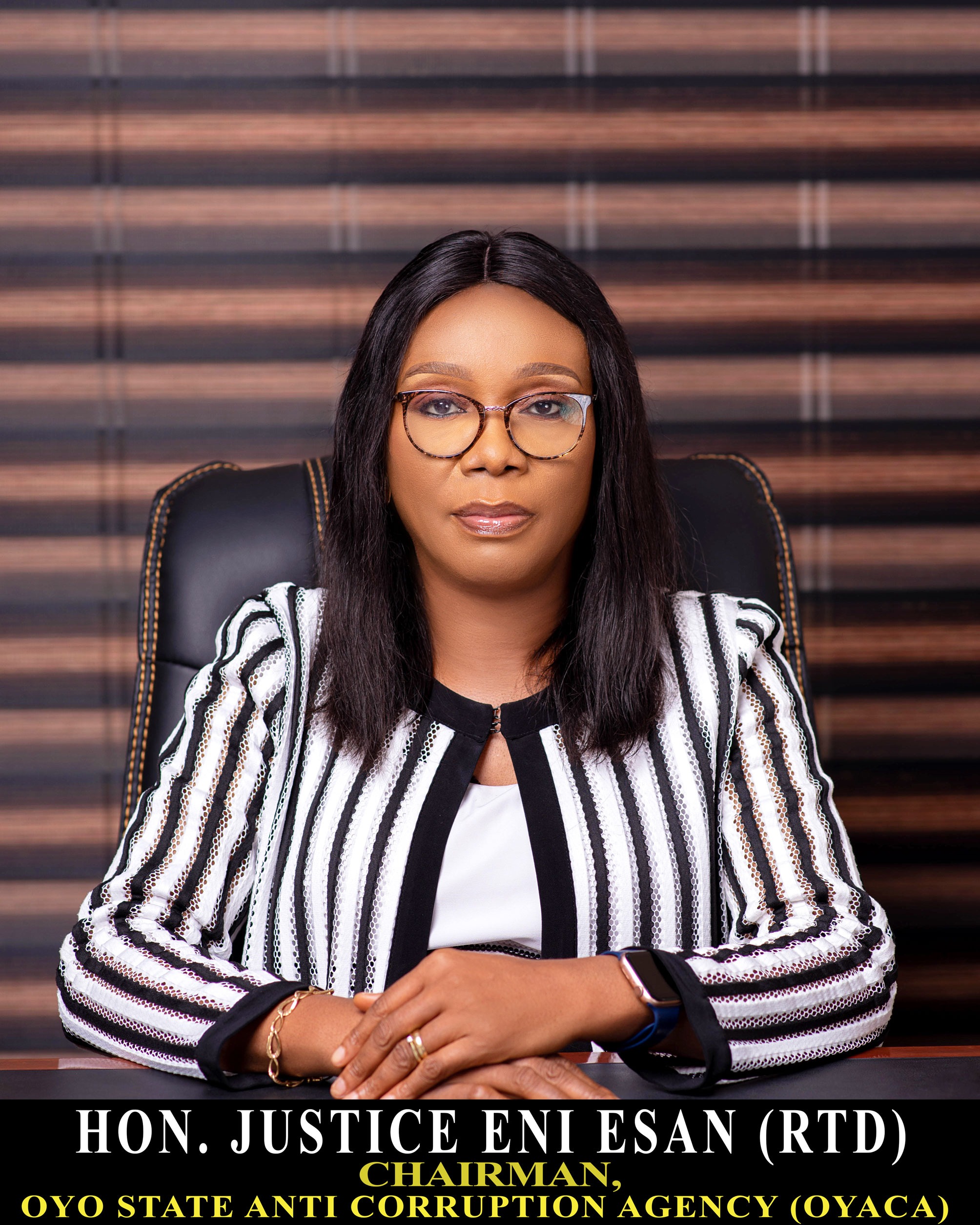 HON. JUSTICE ENI ESAN (Rtd) was appointed and sworn in by his Excellency Executive Governor of Oyo State, Engineer Seyi Makinde as the Chairman of OYACA on the 22nd of December 2020.
She is the pioneer head of OYACA and the first female to be so appointed.
Hon. Justice Eni Esan attended the University of Nigeria, Enugu Campus from 1974 to 1978 Where she obtained her LLB (Hons) Degree. Thereafter, she attended the Nigerian Law School and was called to the Nigerian bar in 1979.

She started her legal career in the Ministry of Justice, Secretariat, Ibadan as a state counsel in 1981. She crossed over to the Oyo State Judiciary in 1989 as a Senior Magistrate. She rose through the ranks to become the Chief Registrar of the High Court and was elevated to the high court bench as a judge of that court in July 2001.
She served in that capacity for 17 years before she was appointed as the President Oyo State Customary Court of Appeal. The appointment was significant as she was the first woman to occupy that position. She headed that court until her retirement in January 2020.
While in the service of the judiciary of Oyo Sate, she attended several workshops, refreshers courses, seminars and conferences both nationally and internationally.

As a thorough bred jurat, Hon, Justice Esan served in various election petition tribunals and election appeal tribunals, including the Gubernatorial and National Assembly Election Petition Tribunals in Kaduna and Cross River States respectively.
She is a member of several professional bodies which include Commonwealth Judges and Magistrates Association, the International as well as the National Association of Women Judges.
She is a fellow Of the Nigerian Institute of Chartered Arbitrators (NICARB) and also a fellow of the Institute of Chartered Mediators and Conciliators (ICMC).
She is a Pastor in the Redeemed Christian Church of God.
She is married with the children and grandchildren. 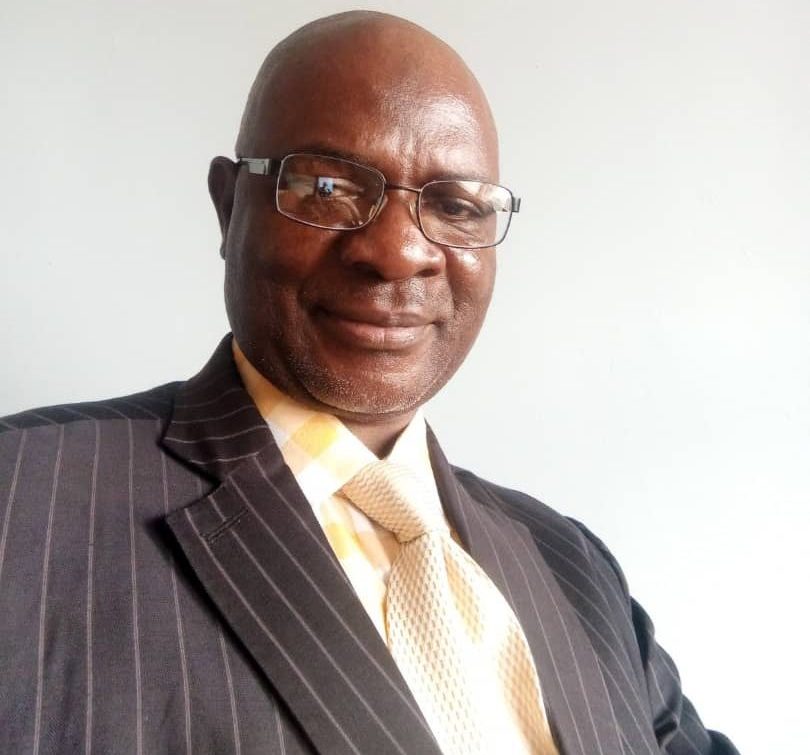 Ibrahim Oyemonla Tijani attended Local Authority School, Olele Okeho from 1972 to 1977 for his Primary School Certificate. He also attended Awoyemi Commercial High School, Okeho from 1979 to 1983.
Thereafter, he attended the Oyo State College of Education Ilesa from 1984 to 1987 where he obtained his N.C.E.
In 1990, he proceeded to Obafemi Awolowo University, Ile-Ife, Osun State and he bagged his LL.B (Hons.) Degree in 1996, He further attended the Nigerian Law School and was called to Bar in 1999. He went back to Obafemi Awolowo University for his LL.M Degree which he obtained in the year 2004.
He joined the Ministry of Justice, Oyo State in March, 2000 where he rose through the rank to the position of a Deputy Director, Litigation and Advisory Services. He has handled many landmark cases for Oyo State Government. Among other Ad-Hoc Assignments given to him, he served as a Counsel to the Judicial Commission of Inquiry on Cases of Demolition of Properties on the Ground of Environmental and Town Planning Regulations, contravention in Oyo State that was constituted on 8th August, 2014.
He is also an Associate Member of Institute of Chartered Mediators and Conciliators (ICMC).
He is married with children.

Ibrahim Oyemonla Tijani is also an Associate Member of Institute of Chartered Mediators and Conciliators (ICMC).

Prince Oyebade Oyedepo was born on the 18th of May, 1964; some 57 years ago at Eruwa in Ibarapa East Local Government Area of Oyo State. He qualified as a Chartered Accountant in November, 1991; 30 years ago. He has a Masters Degree in Business Administration from Ladoke Akintola University of Technology, Ogbomoso in 2008.
He is a fellow of the Institute of Chartered Accountants of Nigeria (ICAN) and the Chartered Institute of Taxation of Nigeria (CITN).
Prince Oyebade Oyedepo is the Managing Partner of Oyebade Oyedepo & Co, Chartered Accountants; a firm he founded on the 13th of April, 1994; some 27 years ago.
He has the following positions to his credit;
a. Past Chairman of Ibadan & District Society of CITN;
b. Past Chairman of Ibadan & District Society of ICAN;
c. Past Zonal Chairman of all ICAN District Societies in the South West Zone;
d. Former Member of ICAN National Governing Council;
e. Former member of a Judicial Commission of Enquiry in Oyo State;
f. Former member of an Administrative Panel of Enquiry in Oyo State.
Presently, Prince Oyebade Oyedepo is serving in the following capacities;
a. Board member of Oyo State Anti-Corruption Agency;
b. Patron of Ibadan & District Society of ICAN;
c. Vice Chairman of Association of Nigerian Authors (ANA), Oyo State Chapter.
His work of intellectual capacity includes;
a. Author of two well researched books on finance; Business Methods and Handbook on Contemporary Issues for Managers, Professionals and Students;
b. Author of various articles published in academic and professional journals.
Prince Oyebade Oyedepo has also written a collection of short stories (prose).
He is a motivational speaker and a public affairs analyst.
Prince Oyebade Oyedepo is a recipient of several awards and laurels from professional bodies, schools and colleges and corporate organizations in recognition of his selfless services to humanity.

Prince Oyebade Oyedepo is a recipient of several awards and laurels from professional bodies, schools and colleges and corporate organizations in recognition of his selfless services to humanity.

Leave your contact
and we'll call you back
in 5 minutes